Another One In The Bag 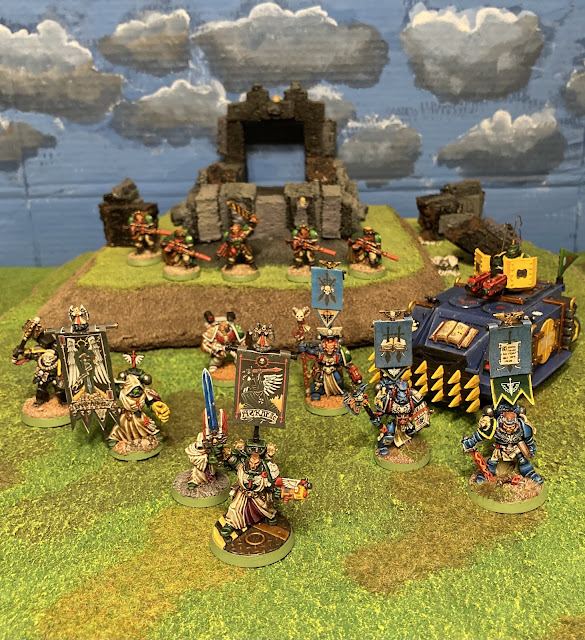 It's hard to believe but the third season of the 2nEdAC has finished!  Since I have been remiss in posting monthly updates, I will roll out the big picture here first and then add some blog updates with the indivdual units completed.  A little reverse order roll-out due to being so busy with gaming and hobbying that typeing about those activities has fallen behind schedule.  My low model count, high points value army has successfully been finished.   I was also able to add a bonus model this time which was a first for me.  Thanks to the good Dr The Viking and his fabulous challenge I now have 3,000 plus points of fully painted Dark Angels, all in a gorgeous technicolor 2nd edition style. This is the largest fully painted army I have owned in 30 years of gaming and is exactly the kind of army I wanted when immersing myself in the 40k universe via reading White Dwarf in the early 90's.
In addition to making my army buidling dreams come true, the challenge has opened up a new community of gamers for me to enjoy games with as well.  As I write this post I'm preparing for a game against my usual challenge opponent, the Wachtmeister.  My panoply of characters from season III will take on his most recent contribution, a few Valhallan squads and a BANEBLADE!  New challenge participant Valhallan Winter also lives in our area and will stop by to see how our tanks versus heroes challenge will turn out.  Stay tuned to this space to see if you can use 7 second edition characters to kill a super-heavy tank.  Thanks for reading after such a long hiatus, and be sure to follow all the links in the texts to check out fun contributiuons to the great hobby! 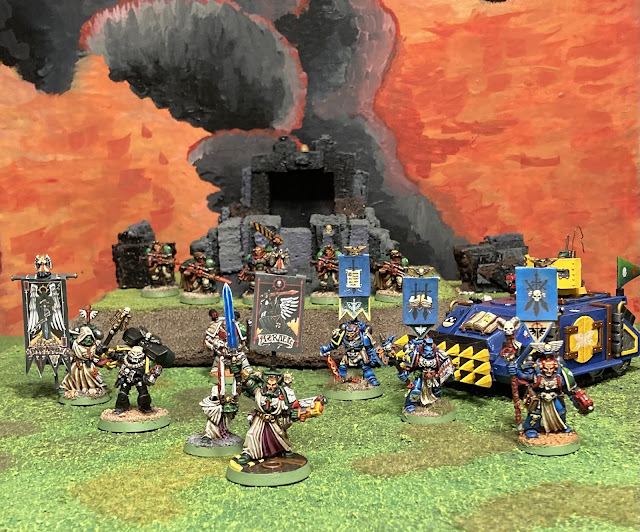 And Now The Thrilling Conclusion ... 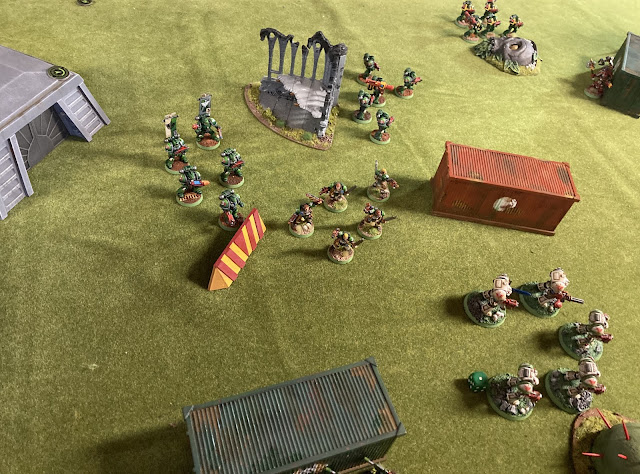 WM: Imperial Guard – Turn 3: The majority of the army continued their advance towards the Dark Angels deployment zone or shuffled around to create better fire lanes.  The infantry squad in the center of the table, whipped to a fervor by the exhalation of their commissar and accompanying priest, charged the scout squad in the middle of the table!  The Legion of the Damned troopers opened fire on the remaining members of the Devastator combat squad, opening the flankfor a final drive.  Once again the Terminators outside of combat weathered the fire of almost the entire Guard

army.  Almost.  The missile launcher team, detached from the squad charging up the center, opened fire and struck the assault cannon armed terminator, which promptly failed its save!  I’m not sure two turns of firing was worth a single Terminator but it sure felt good when one finally died!  The Librarian must have been struggling to control the warp in the close combat phase as he failed to kill any of the mortar crew members he was fighting.  The Priest's zeal was a little misplaced as he was cut down by a Scout in close combat, buta pistol shot through the eye brought down a scout!  The Deathwing were also having a hard time making their superior skills pay off and only killed a single Infantryman in close combat.

The Wachtmeister and I had a chance recently to play a game with all the forces we had painted for the first two rounds of the 40K2ndAC.  We both wrote up a report on the battle, with the Wachtmeisters report being slightly more chronological and mine is a little more after game analysis.  I will switch back and forth with our relevant paragraphs and intersperse with a few photos taken mid game.  The Wachtmeister is a much better photographer than me so be sure to click on his name and check out the report on his blog for a lot of great pictures.
Follow along after the jump for the first half of the action, then tune in later this week for the thrilling conclusion...
Read more »
Posted by Floyd Lawton at 4:20 AM 2 comments: 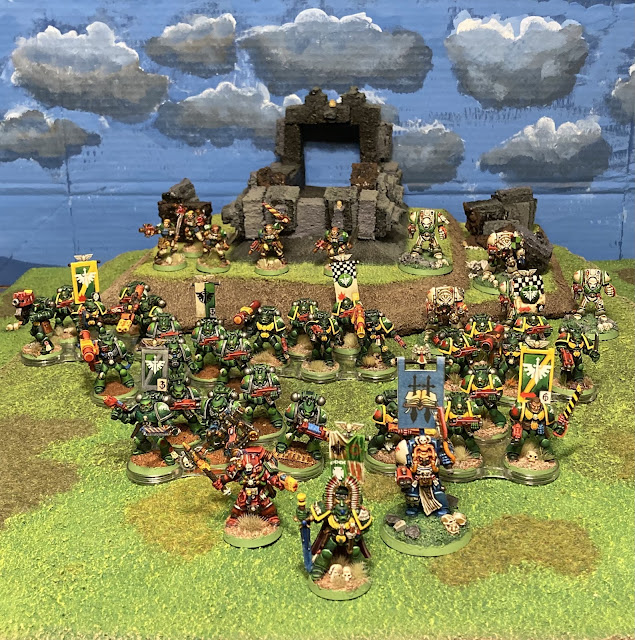 An opportunity recently arose to play an amazing  2,400 point game of 2nd edition WH40K and it was fantastic.  My opponent and I both wrote up our takes on the battle plus we took plenty of photos so an expansive battle report is inbound.  In order to ensure the whole report does not turn out to be TL,DNR I am splittling it up into several parts to make it more managable to read.  The glorious attention grabbing photo of my army above is to lure you into today's post about the army lists involved.  Our opposing forces were made up of all the models The Wachtmeister and I painted for the first two seasons of the 40K2ndAC.  It was awesome to play a game with fully painted models and scenery all with a 2nd edition flair, it felt straight out of the battle reports of old that I encountered when first reading White Dwarf in the early 90s.  Click on the name of the unit to find out mopre details about them from their original appearance on this blog.

Marine with Plasma gun, Marine with Missile Launcher plus Frag and Krak missiles

Veteran Sergeant with Power Axe and Combi-weapon: Bolter and Meltagun, 5 marines with Bolters,

That wraps up the introduction of both army lists, tnue in this week to get a battle report in a few parts.  Be sure to check out the blog that started all this madness, Dr The Viking's C0wabunga 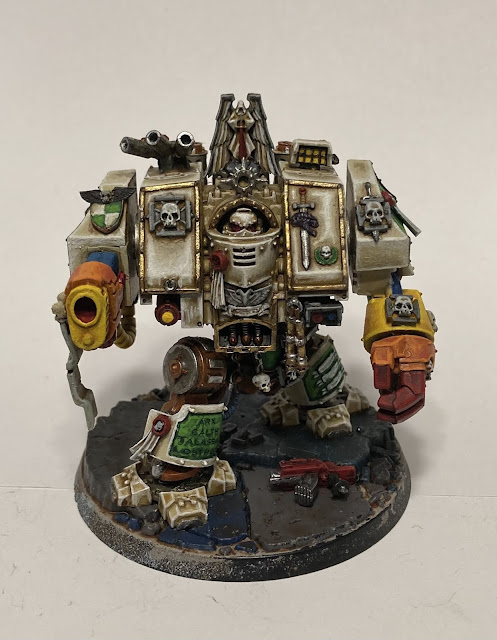 Wow! That was the longest publication break in this blog's short history so I appreciate anyone who has come back after the hiatus.  A combination of a lot of Real Life activity and an addiction to Boardgame Arena online led to the severe lack of posts.  Fortunately I was stilll hobbying and gaming while not posting so there is plenty of content in the pipeline.  My Venerable Dreadnought above is almost finished but way behind on the end of Dreadtober deadline.  In other fun hobby news, the 3rd Season of the 40K2ndAC is underway and I am painting a charatcer heavy 1,000 points this time around to give my Dark Angels 2nd edition army a bevy of heroes to choose from to lead them into battle.  I have finished the first months contribution of two librarians and will feature some photos of the finished models this week.  Thanks for rejoining our program already in progress and stay safe out there...

Posted by Floyd Lawton at 6:30 PM No comments:

Bring Out Your Dread! 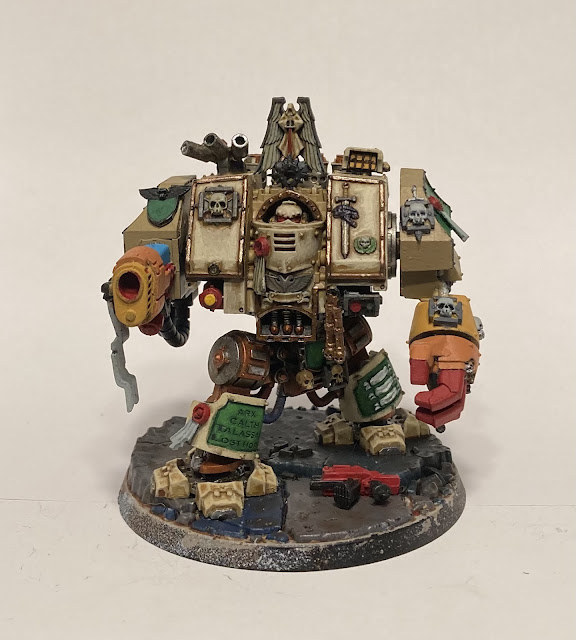 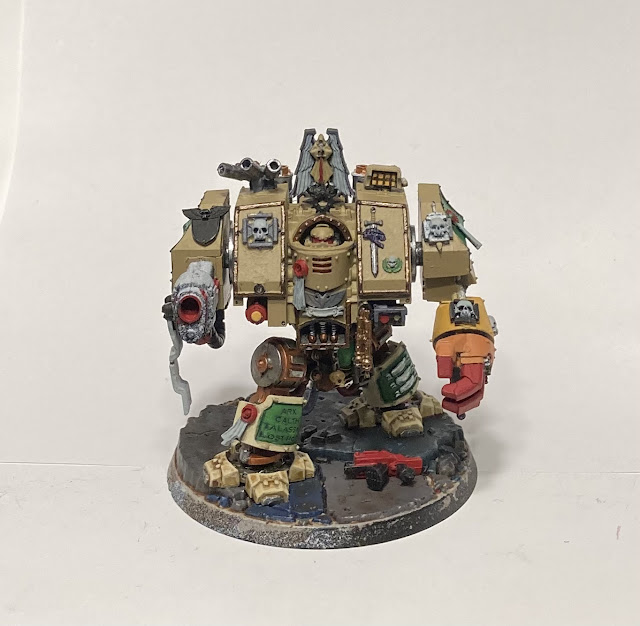 This week almost all the base coats for the many details were finished.  I'm feeling like it's about to crest that wave where it goes from looking a mess to the downhill side of model painting where it finally looks like something and you're continuing to improve its appearance each time you paint.  The next step will be washes and highlights.  Check out all the great fun over at the main Dreadtober site.  Also, thanks to Marc over at Old School Gaming who is coordinating all the action for Dreadtober.
Posted by Floyd Lawton at 3:34 PM No comments: 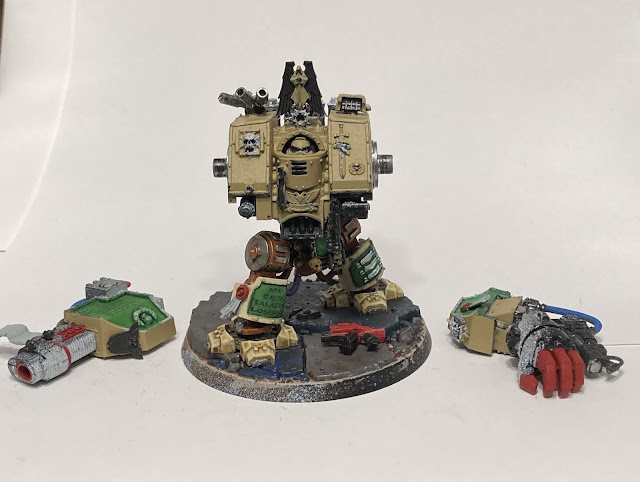 Work on my Venerable Dreadnought is coming along well.  I have the base colors, shades, and part of the highlights done on the legs, as well as beginning to base coat the upper body.  As a tribute to the huge 2nd Edition army I have painted in the last year, I attached a 2nd edition bolter (slightly glue scarred from a tween years attempt at kit bashing combi-weapons) to the base.  Be sure to check out all the great work at the main Dreadtober site and we will see you again next week, same Dread time, same Dread channel.
Posted by Floyd Lawton at 11:13 AM 1 comment:

It’s Over Anakin! I Have The High Ground

Sadly Building Rooftops Are Not As Significant In Star Wars Legion As Standing Slightly Higher On The Banks Of A Lava Flow Seems To Be...
I got to play Star Wars Legion again recently with my friend's beautifully painted Rebel army.  It's been mentioned here in the past, but I am in the ideal situation with this game.  I love Star Wars and find the mechanics of Legion very fun to play, but I don't have the time or money to buy into another game system.  Fortunately for me I have a good friend who owns Imperial and Rebel armies with all the fixings and who paints amazing looking armies.  That way I can just show up at his house and play a game of Legion on a great looking board without adding to my massive painting backlog.  This post will serve less as a detailed battle report and more as an excuse to show off my friends gorgeous miniatures.  Follow along after the jump if you wish you could still play with Star Wars toys and wanted the framework of a game to guide your galactic fun...
Read more »
Posted by Floyd Lawton at 4:20 PM No comments:

In The Grim Darkness Of The Far Future, There Is Only... Snow???? 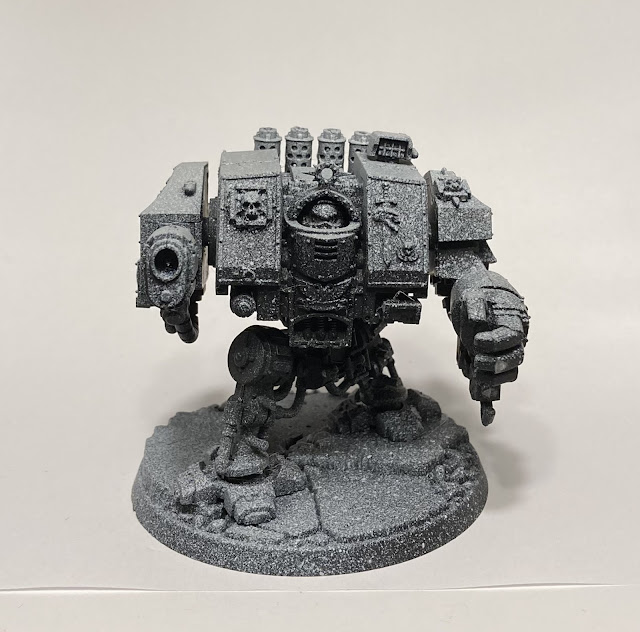 So excited to be here for my third Dreadtober.  Two years ago this month, this blog was created for the purpose of sharing my Dreadtober progress so this is always one of my favorite painting projects of the year.  This time around I'm adding another member to the Deathwing portion of my army, a Venerable Dreadnought. The picture of my primed model above will show my amateur's attempt at a zenithal highlight for the first time in my painting career.  Since I don't have an airbrush, my rattle can combination of primers may or may not bring the desired effect.  It will be a fun experiment nonetheless and I'm excited to get working on this project.  Clink on the link to be sure to check out all the fun at the main Dreadtober site.
Posted by Floyd Lawton at 4:20 AM 2 comments:

Blogging through the Grimdark 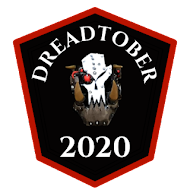